The recent pictures circulating on facebook and some local UK papers of heavily armed police at funfairs and family events show grinning robo cops  posing with children and their parents for  publicity shots. This follows on from the rest of the information in this article. The social engineering of the population into accepting the police state has reached new heights since 2012. The militarization of the police into what looks more and more like a private army goes hand in hand with the military jargon being introduced over the past few years. Check out this Playmobil childs toy which  is referred to as City Action “Tactical Command”, a phrase now used even by administrative sections of the police. Terms such as “relentless pursuit” are used routinely in correspondence with the public in relation to minor crimes  along with their “Total Policing”  agenda. This total policing doesnt include responding accordingly to reported crimes but presenting a military presence. The kids can also play with a more basic police vehicle with riot police.

The Met Police have announced 600 new anti terror “police”
will be a visible presence on the streets.

It will be hard to miss them in these costumes… 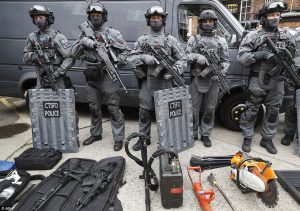 “Whats the grinder for?”

“In case we get clamped by rogue bailiffs sarge”

We can expect lots of new scare stories and random attacks with the media putting out PR for more police alongside this.

The day after this was announced we get a Terrorist knife attack in London.

There was no connection to be made at all but the PR story makes the links which are given to the public in a propaganda piece..

It is later stated that it is not terrorist connected as the man was mentally ill.

The story already served its purpose by linking back to the list of other terror attacks.

Next an Isis captive states that there will be loads more attacks in London and Europe  The Daily Mail.

These stories are like a glorified press release for the martial law police state. The original story of this new army deployed on London streets is followed next day by the backup story that they are needed right now.  There will be a few thousand more…but not yet. They need two years to train them Well, whats the betting on UN and EU army stepping into the Martial law Zone UK PLC before then?

These are not police yet they are wearing a patch on their storm trooper uniforms that says Metropolitan Police. 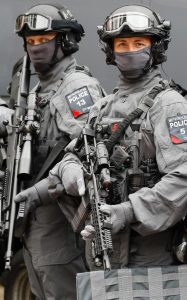 “Sarge, I feel a bit overdressed for Hyde Park on a Sunday afternoon, can I take my mask off?

“No, and dont take your gardening gloves off either”

So this pantomime is to get us ready for full Martial law in the UK.

For anyone following the terror games narrative this was predicted many false flag terror events ago.

Gated communities, curfews, travel restrictions are also on the menu unless the public wake up to this nonsense. 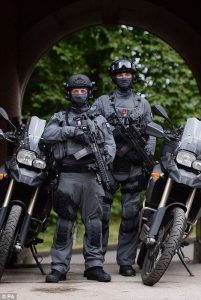 “We dont drive ourselves, we have our own private taxi and courier firm based in the City of London”

They will be driven around on motor bikes by a private company aka The British Transport Police who are privately funded by Railway Companies.

Maybe its just a  PR stunt to sell motorbikes

BTP are not indemnified by The Crown, they are a private company

This is another Public Private Partnership. The lines are blurred.

August 2016, the road blocks and security checks get London ready for Martial Law. 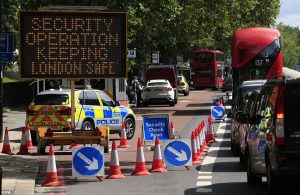 Will these sci fi stormtroopers be of any use in the likes of the recently fabricated Terror Games?

If any of this was based in reality…

These random attacks in public places could only be thwarted by true intelligence and highly trained plain clothes assassins who blend in and look anonymous. They would have to be as unassuming as the patsies that we are told carry out these now commonplace events.

But as things are…

These overdressed clowns would be of no use whatsoever unless they were aiming a gun directly at the suspect at just the right moment. They couldn’t even out run a suspect carrying so much clobber. They would be ok deployed in a shoot out being told where to shoot but not in the random events being played out in the latest Terror Games. What they are good at is attracting attention, good sitting ducks for a sniper.

They are there to remind you we live in a dangerous nightmare world, a bit like that programming through Hollywood which has been training the goyim in this concept for a long time. Without TV training, computer games and Hollywood this would make even less sense than it purports too now. The real reason these overdressed, mask wearing armed to the teeth goons are on our streets is the war against us. Their business partners The BTP are a private company based in the City of London, which is not even under UK Jurisdiction. They also act outside their lawful authority. We have covered this in our video Bogus British Transport Police raid.

The victims of the Terror Games are the unsuspecting public.

For the bigger picture of how your surroundings are being re engineered for total police state control check out our article:  Big Society Change Agents

Now, if we were told that traffic wardens were to be dressed up like this it would at least make sense as they have to encounter more danger than these lot ever will!

Windows on the World airs weekly at www.windowsontheworld.net Sundays 9pm.

The site is also updated regularly with new videos and articles