Researched and written by Public Interest Investigations and Spinwatch and published by EuroPal Forum, it explores a “number of Israel lobby groups in the European Union, the power they wield, and the dubious sources that fund them, while also uncovering the secretive transatlantic networks behind them,” according to an official Press Release

The report’s authors are listed as Professor David Miller from the Department of Social and Policy Sciences at the University of Bath, England; Sarah Marusek (a PhD in social science from the Maxwell School of Syracuse University), and currently a post-Doctoral Research Fellow in Religion Studies at the University of Johannesburg, South Africa; and David Cronin, an Irish journalist living in Brussels.

From the backgrounds of the three authors, it is clear that they have sympathies toward the Palestinian cause—and that they were motivated to compile the report in an attempt to understand why the EU always appears to support Israel.

The authors are careful to state that although their report details exactly how the Jewish lobby affects all aspects of EU policy, this does not mean “that all Jews” are involved in what it calls a “matrix of relationships within the Israel lobby.”

The authors also state that they do not support the “theory that the Zionists ‘control’ Western governments”—but they then produce nearly 80 pages of referenced points proving exactly that.

lobby-page1This is, of course, the reason why the paper has been ignored, even though it was released on May 13 at the EU offices in Brussels and in London.

According to the official press statement, the paper “uncovers the matrix of relationships within the Israel lobby—a social movement that overlaps considerably with the transatlantic Islamophobia industry.” 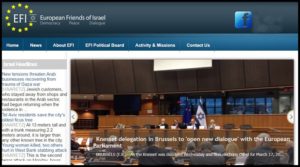 The report says that “Western politicians’ acquiescence to the Israeli narrative is made possible partly because there is a significant international network of groups dedicated to preserving the notion that ‘a democratic Israel is merely acting in self-defense against Palestinian rocket fire’.

“These groups often work together or are aligned and many have close connections with the Israeli government and its diplomats. Collectively, they make up what is often known as the Israel lobby.”

The first chapter discusses how populist parties in Europe have latched onto an anti-Muslim ideology which finds a natural ally in the state of Israel. These organizations include the “Friends of Israel” lobbies within almost all major European political parties.

Israeli military—is revealed to be one of the major financial sponsors of the EU-wide “European Friends of Israel” organization, along with a host of other prominent Jews living in Europe and America.

The second chapter details how the Jewish lobby has “entrenched itself in Brussels” through the creation of a network of organizations whose full-time job it is to continually lobby and influence EU policy, in exactly the same way that the American Israel Political Action Committee (APIAC) goes to work in Washington DC.

All of these organizations, the report reveals, run effective propaganda campaigns to counter any negative publicity resulting from Israel’s suppression of the Palestinians, no matter how bloody and violent it may be.

The report “identifies where pro-Israel groups receive their funding and how some of their donors have facilitated Israel’s illegal colonization of the West Bank, including east Jerusalem; examines how the lobby has persuaded European law-makers to refrain from sanctioning Israel over its human rights abuses; and analyzes how Israel’s supporters have been trying to undermine grassroots campaigning for justice in Palestine,” the report’s press release continues.

The report also examines EU-Israel trade relations, looking at key points in recent history such as Israel’s wars on Gaza and EU reactions to them. “Perhaps the timeliest chapters in this report are the ones that deal with the issue of criminalizing resistance and silencing dissent,” the press statement continued.

“The Israel lobby in both the US and the EU has had considerable success in this arena. Lobby groups in the EU have used the closure of respected Muslim charities in the US to strengthen their call for European countries to classify Palestinian and Arab non-violent resistance to Israeli aggression as criminal.”

“The report also deals with the tactic employed by supporters of Israel of accusing its critics of anti-Semitism. This is very relevant to the recent Labour anti-Semitism row which has led to many debates regarding the blurring of the line between anti-Semitism and anti-Zionist or what is referred to as ‘new anti-Semitism.’”

“The Israel lobby is incredibly strong and wields a great amount of power in politics today,” the press statement adds.

It is therefore little wonder that the controlled media has ignored the report and its conclusions.

The Report can be downloaded here