Glastonbury Town Council, Somerset UK announced in a press release (below) that they were “opposing” the roll out of 5g technology. In the first instance they have no influence over this type of decision and secondly they did nothing to follow up on their promise of public participation and buried the matter at following meetings. The council recently jumped on the bandwagon and declared a Climate Emergency and “Citizens Assembly”. the end of all public participation as we recently reported in our show: Citizens Assemblies = End of Choice 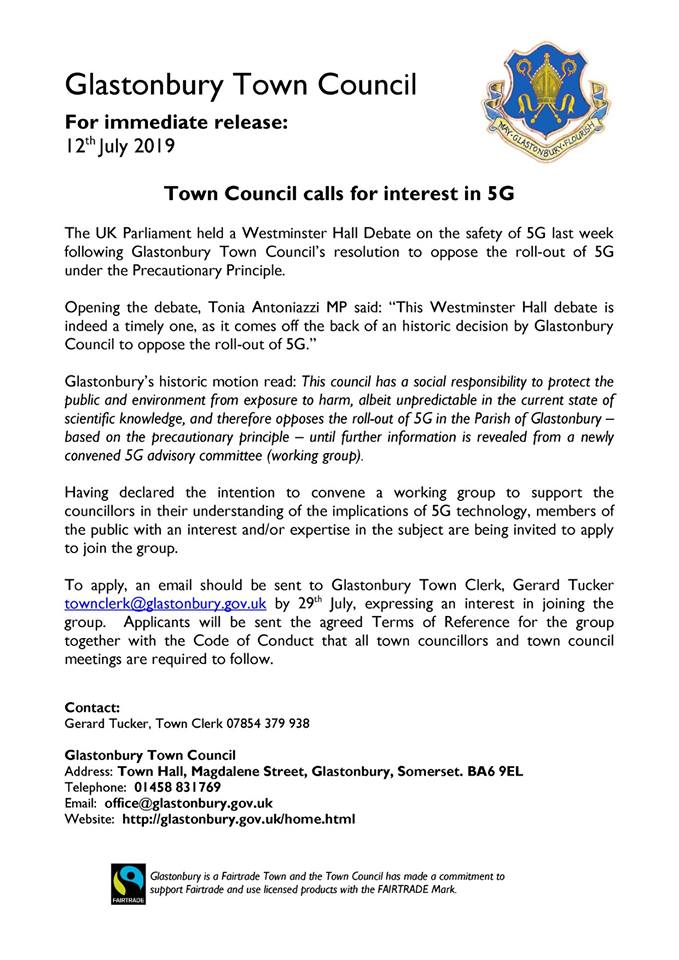 Worse was to come however when a group of demonstrators bringing attention to 5G were accused of “Hurling abuse” at a group of sea cadets at a mayoral parade in Glastonbury. We covered this slanderous accusation and proved it to be false as we had filmed the event in the video below.

The accusation was also used to demonise certain members of the public along with Piers Corbyn who had attended the good natured impromptu event.

The allegations were brought up by councillors and the mayor to undermine participants in two public meetings. Despite the meetings being recorded the Town Clerk Gerard Tucker then denied this in the e mails below and stated that no references to the protestors had been made. The following e mails were sent to all Glastonbury councillors who ALL failed to respond. The hive mind of entitled petty bureaucrat is very evident in this matter.

Here are the e mails:

For the attention of all Councillors and interested parties:

As you may be aware a group of local people and concerned members of the public staged a good natured impromptu event outside St. Benedict Church during the Glastonbury Mayoral parade on Sunday June 2nd. The group were concerned about the rollout of 5g and included astrophysicist Piers Corbyn.

The group were slandered by several members of Glastonbury town council during council meetings and outside the meetings. This undermined the group in the eyes of the public and was a breach of public duty and grossly irresponsible.

To make matters worse online newspaper Somerset Live carried a story which libelled the group which was a in reality just a press release  supplied by Somerset police. The headline “Abuse hurled at teenage sea cadets by 5g protestors during Glastonbury parade”.

The editors on the paper claimed “qualified privilege” which in these circumstances does not appear to apply.

The group require a public apology from both the council and Somerset Live.

The group will not publicly name those responsible for the defamation if a public apology is given by the council.

As the accusations were spurious and the actions of the individual responsible perverted the course of public justice and wasted police time it is in the public interest for the person who made the malicious complaint to be named and action taken against them by the police.

If the council choose to ignore this public interest matter and act against the public interest by non response the group will have no choice but to make the matter public.

Any person involved in the matter who ignores this notice will agree to all its contents by acquiescence.

Glastonbury Residents and Friends against 5g.

The notice was ignored by all councillors and was then sent to the the Town Clerk, who was at the meetings and knew all about the incident and it being referred to in council meetings.

The incident to which you refer was reported to the Police by the family of one of the young people parading with the Sea Scouts. To my knowledge, neither of the committees of the council have discussed the incident and no record of any reference has been made.

This is a rather strange response because Mr Tucker was one of the Town Hall Officials who brought up the matter and he referred to it in the very meeting featured in our show, he is also responsible for taking minutes at all the meetings. He can be heard around 56 minutes in to this show we did about the Glastonbury town council meetings on 5g.

So, we decided to give him the quotes and the times and dates when we recorded them at the council meetings. He then went into the default position of all Glastonbury councillors and failed to respond at all. This was clearly too much information for him…

Thank you for responding thus:

“The incident to which you refer was reported to the Police by the family of one of the young people parading with the Sea Scouts. To my knowledge, neither of the committees of the council have discussed the incident and no record of any reference has been made. Regards, Gerard Tucker Town Clerk”

I must however correct you as the incident was mentioned in two separate council meetings. Here are the quotes:

16 6 19 Councillor Gerard Tucker: “People shouting at people coming out of church, or they feel they’ve got to lose their temper and use bad language is losing the argument and not winning it”

“This is the police report from PC Katy Moise. The public order incident which took place at the mayors parade is still under investigation by myself. I have spoken to the informant who will be pressing this in line with her and her sons wishes. PCSO 9834 Charlotte Bradbury has completed visits with the sea cadets to make ourselves known to them. We plan to continue this contact and have been asked to attend sea cadets and do career support.”

It is unfortunate that councillors failed to respond at all to the request sent out to them and that you are somehow unaware of the inclusion of this fabricated story being used by a councillor (Mr Tucker) in this inexcusable way. The false accusations have been used to undermine a community group in the eyes of the public.

As the matter with the press libel case has now been escalated and the case has been closed by the investigating police officer after the allegations were proved to be false it will be required for the council to make a public apology.

Mr Tucker ignored the evidence and we never heard anything from the council again. A sorry performance from an already disgraced town council.

The Somerset Live publication published the libelous article with one of their own journalists putting his name to it.:

Somerset Live  (Reach PLC) sent the following response when confronted about the libelous headline. Their complaints officer stated that the police had reprimanded two people.

This was not true as a police officer for no known reason attended the home of someone who had openly challenged the council in meetings. Piers Corbyn also happened to be there and demanded an apology which predictability never came. The police stated they were looking into the matter of the public order offence reported in the paper.

The case was immediately dropped by the attending officer when shown the footage in our video, however the newspaper then stated that as two people had been reprimanded about the incident then their article had legal standing. This was not the case and as it was the the police who had supplied the story to the paper it is either Somerset police who lied to the publication or the publication who had lied to us.

Here are the e mails:

I am writing on behalf of www.somersetlive.co.uk regarding your complaint for the following article:

You have suggested that the article represents a breach of the Code, however, the Police have confirmed in a statement that an investigation into reports of abusive comments made against youths was carried out, and in fact two members of group protesting against 5G were given words of advice.

In light of this, the publication does not accept that the article represents a breach of the Code.

However, the publication is happy to remove the article as a gesture of goodwill, should you accept that this will resolve your complaint.

Please let me know if this will resolve your complaint, and I will be sure to organise the removal of the article.

Here is our response which Katie Archer failed to acknowledge:

As you are aware from the correspondence and actions of the police in closing the case the article was never accurate and the author of the piece was a journalist employed by Reach PLC. Therefore we are passing the matter on to our legal representatives who will be contacting you in due course.

So, in the case of the misinformation presented in the e mail above it is  either Somerset Live (Reach PLC) lying or Somerset police. When we find out we will publish our findings.

The whole drama was used by Glastonbury town council to demonise members of the public who were opposing 5g.

So, all in all, a sorry tale of lies and personal vendettas against those whom public servants have a duty to represent.