How the Global Elites have gone from the Cold War to a multipolar front and how the new global management system relies on the global serfdom to accept loss of all rights and enforced rationing and poverty in order to save the plant from humanity itself using apocalyptic predictions with no scientific basis.

Their historic world surface data sets leave out 90 percent of the Earths surface. The weather stations report freezing tropical islands, sea measurements on land and even stations which closed years ago.

The AGW theory though is secondary to this UN-backed management and control system so there is really no need for science.

The first part of the show looks at how the Global Action Plan is achieved by the Global Elite and how all the narratives are controlled.

How the two polar world with the threat of the Cold War (USSR V USA, Communism v Capitalism) went into a new multi polar world of divide and rule, fake conflict and imposed resolution.

The endless war on terror is a great backdrop for the continuing agenda along with the fake left and fake right but the main driver of global policy is now  the threat of man made climate change. The Climate is a natural process which has been hijacked by the elite for a new war on freedom where the serfs willingly annihilate the last of their remaining rights on the back of yet another monumental lie.

The new controlled opposition groups presently funded by George Soros, NGO’s and corporate interest are now all a part of the Hegalian Dialectic of divide and rule.

The opposing sides create a third way, presently a politically correct and narrow corridor of accepted propaganda masquerading as opinion which the media and governments use to shut down dissent and debate. 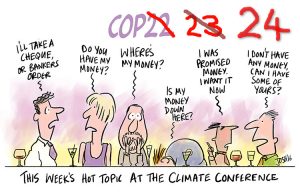 The Club of Rome

In 1993, the Club published The First Global Revolution According to this book, divided nations require common enemies to unite them, “either a real one or else one invented for the purpose.”^ Because of the sudden absence of traditional enemies, “new enemies must be identified.”

“In searching for a new enemy to unite us, we came up with the idea that pollution, the threat of global warming, water shortages, famine and the like would fit the bill.. ..All these dangers are caused by human intervention, and it is only through changed attitudes and behavior that they can be overcome. The real enemy then, is humanity itself.” 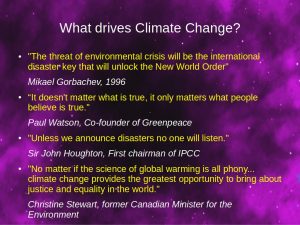 In their own words:

“…one must say clearly that we redistribute de facto the world’s wealth by climate policy.

“The data doesn’t matter. We’re not basing our recommendations on the data. We’re basing them on the climate models.” –

“The models are convenient fictions that provide something very useful.” –

“We need to get some broad based support, to capture the public’s imagination… So we have to offer up scary scenarios, make simplified, dramatic statements and make little mention of any doubts… Each of us has to decide what the right balance is between being effective and being honest.” –

The Assessment concludes that the Earth’s biological resources are under serious threat. The damage being done today — largely as a result of human activities — will limit the range of options that people will have in the future.

This means: Control of populations, smart cities, police state surveillance, no private vehicles, no private property, (unsustainable) state dependence. According to the UN by 2050 two thirds of the world population will live in Human Settlement Zones (Smart Cities) 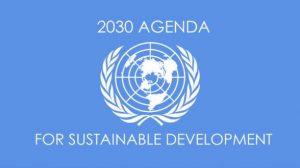 It is also worth pointing out that the IPCC clearly state in their own Report “The climate system is a coupled non-linear chaotic system, and therefore the long-term prediction of future climate states is not possible.” IPCC

The quotes above which suggest that this is not an environmental plan are backed up in the latest report:

This show then looks at the latest flawed and absurdly inaccurate release to the public by The Intergovernmental Panel on Climate Change (IPCC). The SR15 report uses data from weather stations which were closed down, sea stations which were on land and freezing tropical islands. 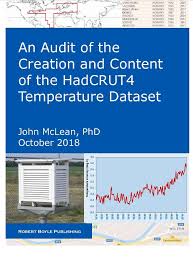 It seems like neither organization properly checked the land or sea temperature data before using it in the HadCRUT4 dataset. If it had been checked then the CRU might have queried the more obvious errors in data supplied by different countries. The Hadley Centre might also have found some of the inconsistencies in the sea surface temperature data, along with errors that it created itself when it copied data from the hand-written logs of some Royal Navy ships.”

HadCRUT4 is a global temperature dataset, providing gridded temperature anomalies across the world as well as averages for the hemispheres and the globe as a whole. CRUTEM4 and HadSST3 are the land and ocean components.

In May 1861 the global coverage, according to the grid-system method that HadCRUT4 uses, was 12%. That means that no data was reported from almost 90% of the Earth’s surface.

Despite this it’s said to be a “global average”.

That makes no sense at all. The global average temperature anomaly is calculated from data that at times covers as little as 12.2% of the Earth’s surface”, he says. “Until 1906 global coverage was less than 50% and coverage didn’t hit 75% until 1956. That’s a lot of the Earth’s surface for which we have no data.” –

The fate of the planet is at stake, but the key temperature data set used by climate models contains more than 70 different sorts of problems.

The monthly mean temperature in September 1953 at Paltinis, Romania is reported as -46.4 °C (in other years the September average was about 11.5°C).

Thanks to Dr John McLean, we see how The IPCC demands for cash rest on freak data, empty fields, Fahrenheit temps recorded as Celsius, mistakes in longitude and latitude, brutal adjustments and even spelling errors.

DID YOU HEAR ABOUT THE PORTO CONFERENCE ?

We then go on to talk about the quiet voice of reason and the unreported recent Climate Conference in Porto, Portugal which attracted scientists and speakers from all over the world who put the CO2 theory in its rightful place with real data. A truly ethical group of scientists ignored by the media: geoethic.com

“Unanimously all the assembled scientists put the human-emitted CO2 on the back seat of the climate-mobile. NO one supported in any way the “hysteria” in media and politics to reduce this assumed “threat” propelled by IPCC political papers and lobbies behind dominant media releases.”

You probably never heard about this Climate Conference either as it was banned by UCL even though the room had been booked by one of their own lecturers. It took place at Conway Hall and was ignored by all mainstream media:

We receive no funding and appreciate your support. If you benefit from our information why not help us keep going? 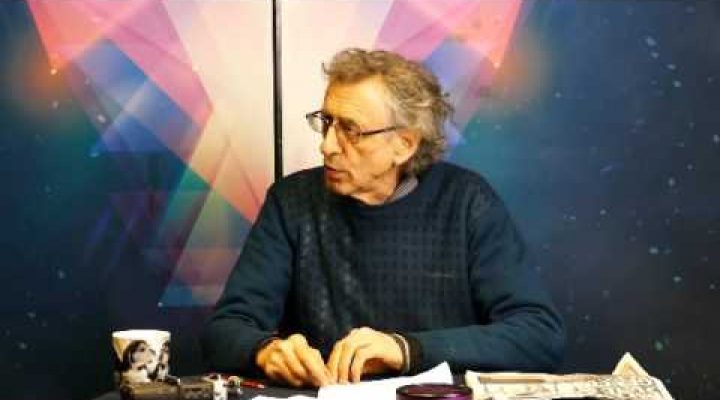