This article courtesy of  Kevin Boyle who has a great skill in pointing out what should be the obvious. The distraction technique used by the words “antisemitism” and ” Nazi”  when historical fact is pointed out is beyond a joke.

Ex- leader of the Greater London Council and (more recently) Mayor of London, Ken Livingstone has been suspended  from the Labour Party for stating a TRUE (if little-known) historical fact relating to Israel and Hitler.

There are two possible reasons for this mind-boggling development:
1) The Labour Party has become insane under the Jewish onslaught wreaked upon it over the past few weeks (the objective of which is getting Jeremy Corbyn removed as Party leader),

2) The Labour Party has had enough of infernal bullying and lapdog media pressure and have decided to do something stupid in order to highlight the ridiculous nature of the continuous charges of ‘anti-Semitism’ levelled against them. (After all, as Gilad Atzmon says, they could hardly have sold out to Jewish pressure more abjectly) … But, it appears that for this lobby submission must be total and the necessary consequence of criticism of Israel must be public humiliation, loss of career or both.

Livingstone said that Hitler was a Zionist before he “went mad” (i.e. started shoving millions of Jews into human gas chambers); that he did a deal with International Zionism in 1933 to transfer German Jews to Israel. This is true and well documented. The Haavara agreement is described on Wikipedia (definitely not an anti-Semitic site)Here . 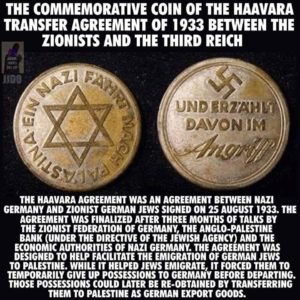 “In 1935 the steamer “Tel Aviv” made its maiden voyage from Nazi Germany to Haifa with Hebrew letters on its bow and a Nazi flag fluttering from its mast.”

The Captain of the Zionist-owned ship was a member of the Nazi Party.

The ship transported German Jews who had taken advantage of the “Haavara” program, which allowed them to exchange their money for its value in German products in Palestine.

As a result, the fledgling Jewish colony received about 70,000 highly educated German Jews and 140 million Reichmarks worth of German industrial equipment. This laid the foundation of Israel’s infrastructure.

The arrangement also boosted the Nazi economy at a time when Jews worldwide were boycotting German products. (My main source is “The Secret Contacts” by Klaus Polkehn a prominent German journalist”
http://www.henrymakow.com/000482.html

It will be interesting to see how the Labour Party and the media deal with this issue in the public domain and what spin they will try to put on Hitler’s ‘Zionism’. My guess is that it will soon be declared that Livingstone’s conflation of Zionism and “Hitler” had little to do with his suspension, thus putting aside the need to mention this issue ever again.

On the bright side, if this shocker does get a genuine public airing, here’s hoping we can all move along to discussion of Livingstone’s other reference, Hitler’s ‘madness’ … then, at long last, we might get fair debate in public (excuse the joke) relating to those dreadful human gas chambers in Auschwitz.
You know …. the ones that absolutely Absolutely  Provably  Never Existed

Ken harassed at Westfield the chain of shopping Malls owned by Mega Zionist Frank Lowy Frank is the business partner of Lucky Larry Silverstein. The pair purchased the Twin Towers a short time before 9/11 and insured them against Terrorist attacks and claimed Billions in insurance money. Its not all been plain sailing for him, Frank went down faster than his twin towers and the same speed as building 7 whilst presenting a trophy for The Australian football League. He was previously active in Hagganah the Israeli terror organization and claims to be a survivor of Nazi “death camps”.  More on Frank Here.

Labour activist suspended over anti Zionist comments.  Who is is controlling the Labour Party?

The Protocols of Power